Grey Granite found Kinkell Kirkyard quite by accident, noticing the Historic Scotland sign on the way to Inverurie from Keith Hall where Rufus was at the dog groomer's being spruced up. 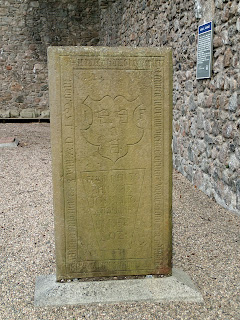 The carving on the reverse side of the Greenlaw stone includes the three boars heads and a hawk of the Forbes  of Ardmurdo crest. The inscription round the edge reads 'Here lies, bright with honor, and adorned with saintly piety of character, John Forbes of Ardmurdo, fourth successor of his name (?) who died 8th July 1592, in the 66th year of his age.' Beneath the arms is a text in Greek  (Philippians 1 verse 21) 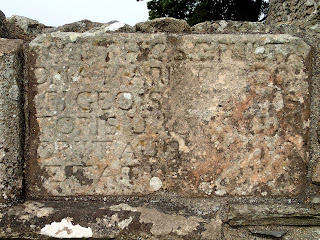 A slab in the east gable of the church commemorating Dame Mary Gordon, wife of George Skene, minister who died 1st August 1712 aged 32.


When we walk at the coast

and notice, above the sea,

veering towards the earth-

can we allow ourselves to fail.